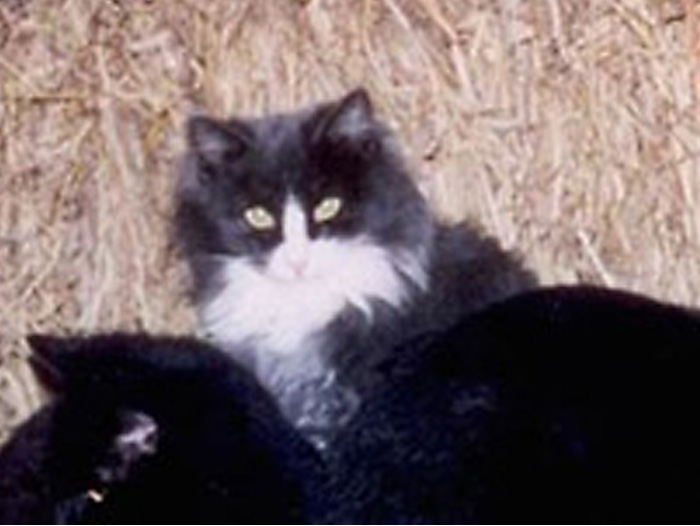 Misty and her Kittens

Misty has 3 kittens, Tattoo, Totem, Tinker and Tikki. She is a very pretty barn cat, long-haired with a beautiful face. When I moved into my farm, Misty and a few other kittens were a gift to me from a friend who has her own farm. That farm woman had been socializing and handling these kittens since they were born so that they would be friendly barn cats. Most people buy gifts for new farm owners like shovels and “mucking forks” (special rakes to clean stalls), but this friend gave me a few young cats from her farm! Misty was one of those young cats…and Raven and Theo, from Book Two, and Angel, who does not have a story written about her yet, were the other young cats from a different litter. When these new barn cats were old enough and I was preparing to get them “fixed” (“spayed” and “neutered” so that the female and male cats could not reproduce more kittens) Misty ran away and hid in the barn rafters. Even the vet who came to my farm to pick up my barn cats to “fix” them could not catch her. Misty got pregnant soon afterwards to a feral (wild) cat from the woods that I called Patches…you could not get near Patches, he was feral (wild) and always ran away. I knew he was the father of the kittens. When I arrived at the farm to feed the morning Misty delivered her kittens, she walked up to my feet and looked straight up at me. I noticed her belly was very wet from just giving birth. And, then she meowed, as if to say “follow me” and she showed me where she gave birth to her kittens, behind a bale of hay to keep them safe. I was able to pick the kittens up soon after they were born and that is why they are so friendly instead of being feral (wild). I named them Tattoo, Tinker, Totem and the only female, I named Tikki. After Misty’s kittens were weaned (they could eat real cat food instead of nursing on their mother’s milk), I did get Misty spayed,“fixed”, also. The kittens are now full grown cats and they still enjoy running and playing and napping on hay bales. They also enjoy chasing small stalks of hay that slide across the barn floor in the wind. They are older now, but I still always enjoy watching them play! I often think that it was meant to be that Misty delivered those four kittens…they have always brought joy to me and to those who visit my farm, and to readers of my books, too.

We enjoyed meeting you at the Horse World Expo and what you said to Ryan has stayed with him. He just recently used your book as his main focus for his oral presentation at school. We have read your entire book as a family and absolutely love the moral messages behind each story. What a gift you have!